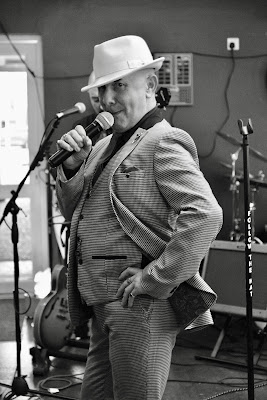 Probably the best-dressed man in Norfolk East Anglia The World, D. C. found stardom after singing karaoke. An appearance at a jam night at the Dereham Blues Festival in 2013 led to him forming the band that bears his name. From a musical family (his parents were big noises on the local folk scene) his influences include Otis Redding and Wilson Pickett. Listen to this recent interview on Radio Wymondham to hear D. C. talk about his life, influences, music and hats. Is believed to own more than 14 20 24 30 suits. 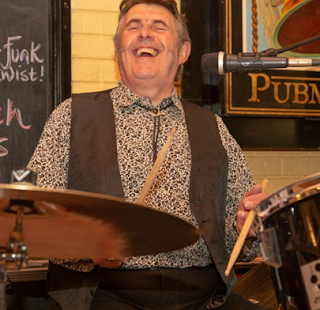 Paul 'Timeless' Borley: Drums
Paul has been interested in banging stuff together since his earliest youth when he played along to the Beatles and the Stones, and, later, Cream. Today he hits Ludwig drums, and lots of them. That is, when he isn't walloping even more drums, by Sonor. He also whacks a few cymbals. He owns more snare drums than most people have had hot dinners, and is the only member of the band who really understands which wires go where in our P. A. system, and why. 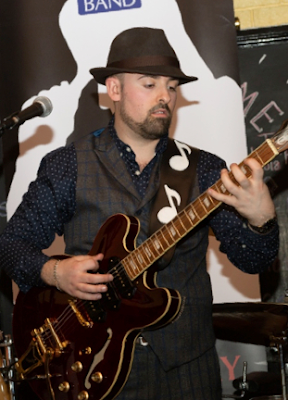 Simon 'Baby Face' Sales: lead guitar
Devilishly young and handsome (though this isn't difficult next to the rest of the band) Simon  came to the DCWB from local band All Blue. An old head on young shoulders, he is strongly influenced by the late, great B. B. King. On stage he is mainly seen with an Epiphone semi, but also totes one or two custom semis, a Fender Strat and a PRS, though not all at once. Mr Sales' amps - Fender. Mr Sales' hats - City Hats of Norwich. 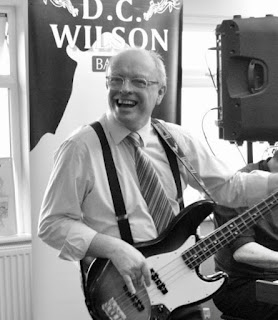 Matt has played bass for longer than he cares to remember, learning the basslines to any and every song he came across. Then one fateful day, he bought an album by John Lee Hooker ... and another by Muddy Waters ... and that was that. He hoovered up every blues album he could find. The same thing happened with Jazz, Southern Soul, Bluegrass, Hill Blues, Tamla Motown: his appetite for American Roots Music is voracious. He has played in bands in Norfolk for around 30 years. His favourite bass players include James Jamerson, Jaco Pastorius, Nick Lowe, Ron Carter, Willie Dixon and Jack Bruce. He mostly plays Fender Precision and Jazz basses, but also has a small collection of exotica including a Burns Marquee, an Epiphone Rivoli and a Danelectro Longhorn. He makes these much louder with Trace Elliot amplification. Stating his influences as Freddie Mercury, Jon Lord and J. S. Bach, all of whom are dead, the Doctor has been taking time out because of, you know, the THING. But he hasn't been idle, having recorded two solo albums (check out his version of Birdland here)and masterminded D. C. Wilson's first commercially available collection, The Very Best of the D. C. Wilson Band. 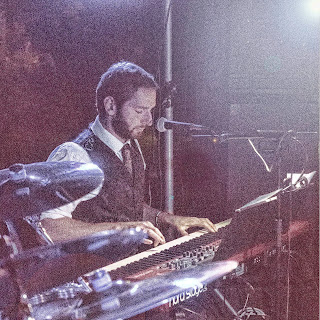 Multi-talented Jon, currently standing in for Doctor G, joins the band from busy function band Gecko. He's also busy treading the boards as a Theatre Director and he pops up here and there on keys or guitar. With D. C. Wilson he uses a Nord Stage 2.

The World Of DC Wilson